The FDIC and other government agencies are urging the unbanked to open bank accounts so they can deposit their stimulus funds. However, many experts are pointing toward what is likely, an obvious challenge toward this effort. This challenge points specifically to someone who isn’t willing to open an account. What is the government doing to convince them to change their mind now that they weren’t able to do before?

The IRS and FDIC are working hard to encourage consumers to consider opening low-cost bank accounts after the enactment of President Biden’s American Rescue Plan. On April 6th, 2021, the FDIC initiated a public awareness campaign with slots on the radio, television, and digital ads in the Atlanta and Houston areas. These ads tout the benefits of opening an account that is federally insured.

However, one of the main challenges for the FDIC is convincing minority communities and lower-income populations to trust a bank. Given the historical reluctance to join the traditional banking system, the FDIC and IRS may have their work cut out for them.  Trying to establish and even reestablish this trust isn’t easy, but the FDIC has started the #GetBanked campaign. Since a lack of confidence is one of the most fundamental reasons for many of the unbanked not to open an account, the path to achieving this trust isn’t so simple.

Many have observed that the FDIC has offered unbanked, specific steps to open a safe and affordable bank account. According to the FDIC, over 7million households don’t have access to a financial institution. This has led the agency to push the unbanked to use their BankFind tool on their website to find federally insured banks near them that will allow them to open an affordable and secure account. This page will also offer to link users to Bank On. This is a non-profit that certifies affordable accounts that have been endorsed by the American Bankers Association or ABA.

The FDIC is hoping the message they send offers a concrete way for people to act on. There is also hope it gives the unbanked the easy way to get and open a bank account. If this message becomes muddled or unclear, then the message is ineffective. Since the nation is a year into the COVID-19 Pandemic, the stakes are pretty straightforward. The unbanked in America will have a significantly harder time in receiving their stimulus funds.

While the FDIC has shown that the amount of unbanked and underbanked Americans has declined by roughly a percentage point, the rate remains higher for black and Hispanic communities. The disparity is apparent as many black Americans, approximately 14%, remain unbanked. Its also quite clear that the FDIC can do better in bridging this racial gap.

#GetBanked and the Economic Disparity

This FDIC campaign is focusing on Houston and Atlanta areas with a mix of radio and television ads along with digital advertising that covers both English and Spanish-speaking communities. On top of these ads, the FDIC is conducting webinars about how to open an affordable bank account, especially one that is federally insured, so they know that their money is safe and secure.

The FDIC knows that many won’t have enough money to meet many of the minimum balance requirements with many banks. This has proven to be one of the reasons why so many remain unbanked after a significant lack of trust in them. However, other financial services are costing the unbanked and low-income more. Even traditional institutions are charging more, and those without a lot of money are paying higher fees. 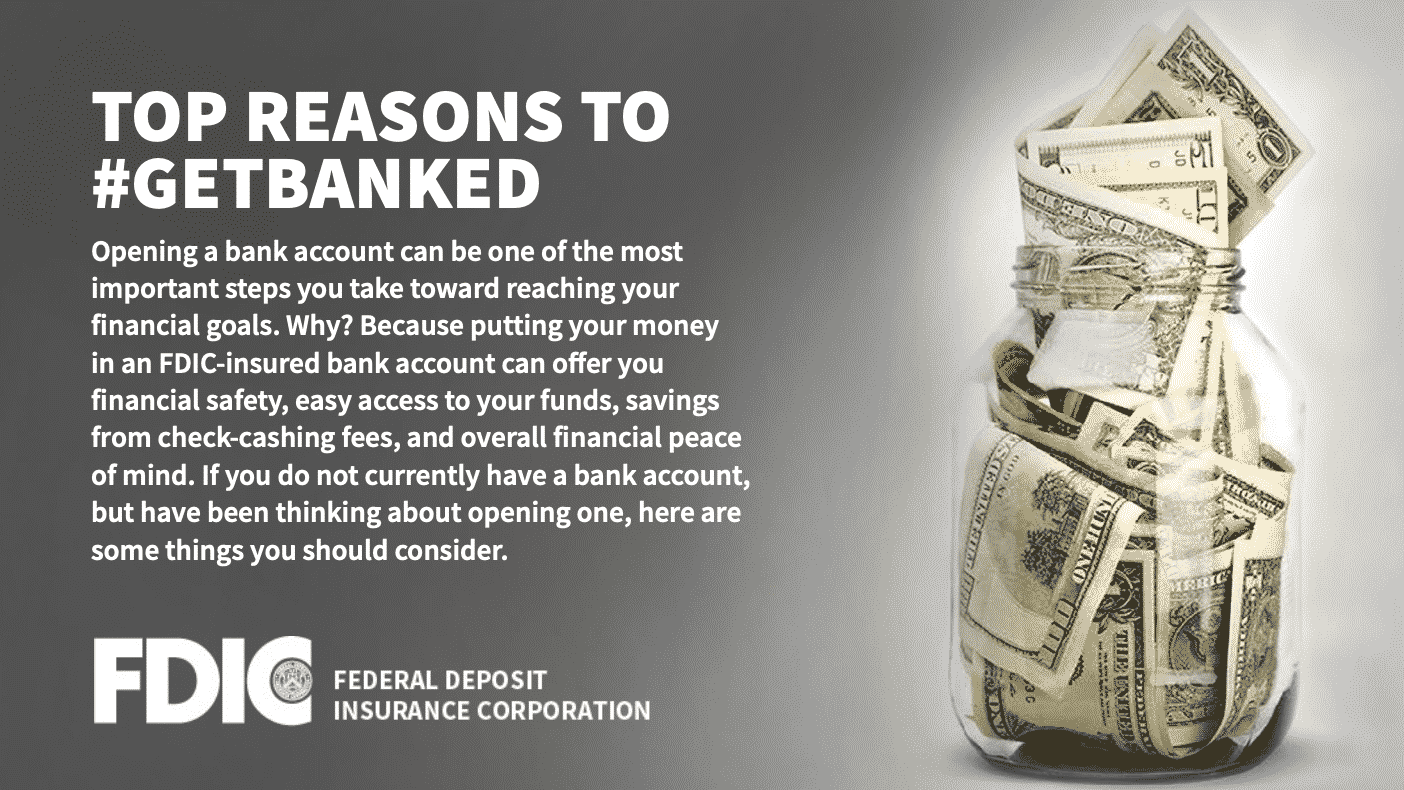 A clear example is overdraft fees. U.S. Banks made more than $11 billion in revenue and over a billion in assets in 2019 alone. The significant amount of money came from smaller accounts that held less than $350.  A lower-income individual could see higher transaction costs and overdrafts that are automatic using the traditional system.

With the #GetBanked campaign, a new account has emerged within the banking industry. Hopefully seen as a new standard for those with lower income and proper certification through the Bank On non-profit, these accounts are designed to reduce costs. This way, more lower-income individuals can avoid overdraft fees, have a maintenance fee cap, and avoid fees for insufficient balance or account inactivity.

Currently, over seventy-six banks from across the country are doing this to build trust with the consumers who have started using them. This trust is coming from positive experiences as people are getting what they expect. They are being delivered a product as it’s been advertised. However, part of this public awareness comes research into the very problem and the people it affects. Also, many analysts stress that even though they are closing the gap in trust between the banks and lower-income communities, it still doesn’t address the problem of inclusion rooted within the financial institution.

Trust has become an essential issue, but for many, it’s not always for the exact reason. Wealth also isn’t a huge reason. For many, tackling a more tangential reason like wealth inequality is more important and should be considered more than anything else. There’s also the keeping banks committed to long-term service of making sure their accounts are kept affordable.

While the FDIC and the IRS are pushing for the unbanked to open up bank accounts, it remains unclear if people’s trust will change or if the impact of getting their stimulus checks faster will play an important role. Unfortunately, most lower-income individuals rely on check-cashing services or payday loans with higher fees to get their financial services. While many banks offer accounts for those who can’t meet the minimum balance, some fear the banks will come up with new ways to regain these lost revenue streams. However, as trust builds in the financial sector, more of the unbanked can hope for lower fees and better security. These newer accounts are explicitly designed for their needs. Time will tell as more stimulus money looms on the horizon. The FDIC continues its campaign to encourage people to open an account.