Cryptocurrency turned 11 this year, and despite its tenure the industry is still well ahead of mass adoption. However, the world of digital currency is bubbling with disruptive ideas and exciting innovations. With a $369 billion market capitalization, the world of cryptocurrencies is only growing. The growth in cryptocurrencies is led by several factors, including hedging against inflation, cryptocurrencies as an investment and digital assets being used for  everything from real estate to lending.

The high cost of bank loans and services, bureaucratic and inefficient technical infrastructure, and data breaches are at the root of world-wide concerns in the current banking industry which will ultimately lead to global mass adoption of cryptocurrency and blockchain technology. Indeed, we are seeing a consistent overall growth that can be easily measured by the number of crypto wallets being generated. 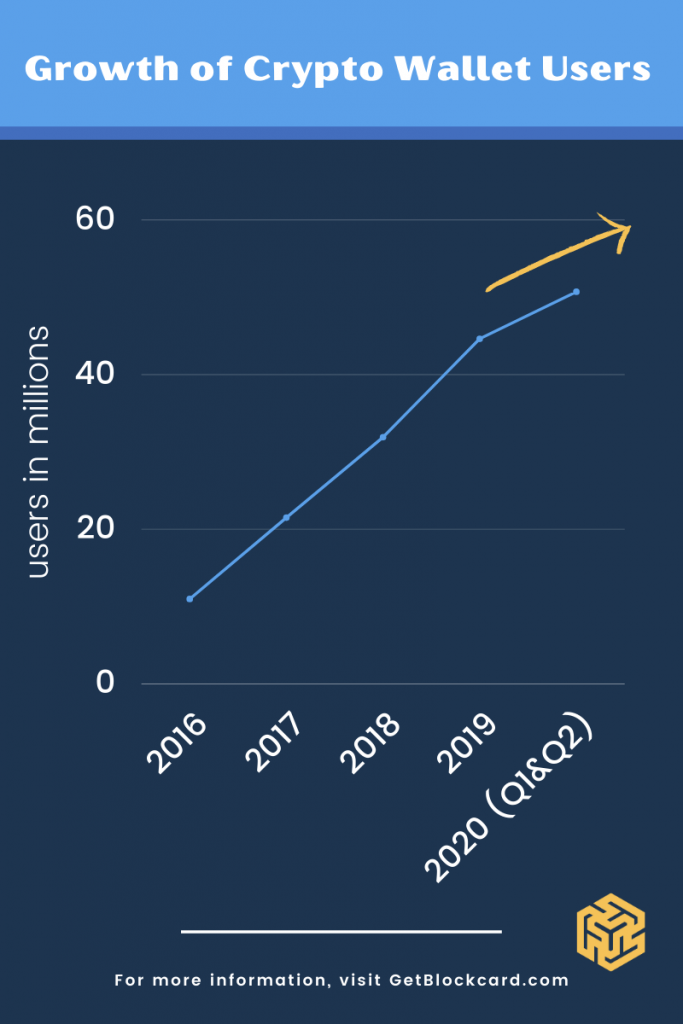 Unlike government issued currencies that are centralized, digital assets do not require a central clearing house as they’re built on blockchain technology.

Blockchain technology offers a way for two different parties to come to agreement on the state of a database without the intervention of a middleman.  By providing a decentralized ledger that is self-administered and automates efficiencies with smart contracts, blockchain can help financial institutions establish better governance and standards around data sharing and collaboration. Global banking is currently a  trillion dollar industry, and blockchain can disintermediate key services that banks provide, such as:

Investment in Blockchain is Increasing

A report published by Santander FinTech suggests that implementing blockchain technology into the financial sector could reduce the infrastructure cost by $20 billion/year. The possibility of significantly reducing IT costs has led to the investment of millions of dollars into this technology each year, shows data from PwC and Statista. 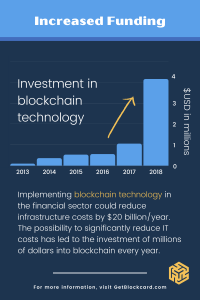 Blockchain also holds potential implications for global commerce by replacing current manual and paper-based processes with streamlined and automated processes. Today, trillions of dollars move around the globe sluggishly through an outdated system of added fees and slow payments. A public blockchain can behave as a tool to collaborate since it’s decentralized and no single entity can own it. This can cut down on the need for third-party verification, reducing processing time and fees for traditional bank transfers. Here’s a comparison of costs associated with bank transfer and crypto transactions for sending $1,000 to India from the US. 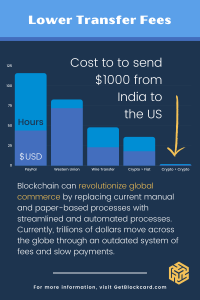 Stablecoins: To Secure the Future of the Crypto World

While it will take many years for fiat currencies to convert to a CBDC model (Central Bank Digital Currency” the last few years have seen an aggressive adoption in transaction volume. In a report published by TokenInsight, the size of the digital asset space is growing with $23 billion of daily trading and $4.081 trillion of trading volume of the overall cryptocurrency industry.

Despite seeing such growth in their volume, digital currencies have still not achieved global acceptance for a few key reasons:

But now, a promising category of cryptocurrencies, Stablecoins, are poised to succeed where their predecessors failed. As the name suggests, a stablecoin distinguishes itself from its more familiar but highly volatile digital currency predecessors, like Bitcoin, by focusing on price stability.

There are many versions of stablecoins; however – the best and most sustainable version are regulated, trusted digital assets that are always redeemable for the fiat counterpart equivalent.  Effectively – they’re asset backed tokens where $1 USD stabletoken is redeemable for $1 US Dollar that’s physically custodied by a bank.  The very first stablecoin project, Tether, was launched in 2015, and its market value has grown from  $304k to $12 billion. 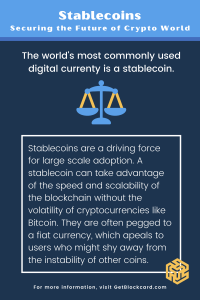 The interest in stablecoins is growing exponentially because they’re backed up by real monetary assets such as USD, GBP or other fiat currency held in a bank.  There have been many notable announcements regarding stablecoins over the past couple of years:

4)      JPMorgan moving ahead with plans to offer cryptocurrency-based transactions

In addition to these news stories, many worldwide developments have also caused ripples across the global financial services sector.

Projects Around the World Driving Great Interest in Cryptocurrencies

1)    As a part of the government’s initiative in digitizing Tunisia, LA Poste, a financial institution, issued a blockchain-based digital version of the country’s currency. The project had support from local Fintech firms and a Swiss-based software company. The e-dinar launched in 2015, and it’s still a successful use case of a government-issued digital coin.

4)   Central banks in Asia are a step ahead in launching cryptocurrencies for future payment systems and cross-border transactions, with China, Hong Kong, and Thailand set to roll out sovereign digital tokens. The People’s Bank of China states that its digital currency is progressing, although they haven’t shared any word on the launch date. Contrastingly, the Hong Kong Monetary Authority and Bank of Thailand successfully completed the initial phase of their currency project in the first quarter of 2020, and are now inviting banks to participate to test the real-world application of digital currencies.

5)    On October 30th, 2019, the Association of German Banks published an article that covered the details for a ‘crypto-based digital Euro’. Two weeks later, the European commission organised an event called “Convergence, the Global Blockchain Congress”, where an official of European Central Bank confirmed that the bank is exploring blockchain technology to work on a digital EURO.

6)   In July 2020 Andrew Bailey, the governor of the Bank of England, confirmed the development of a digital currency. The bank also published a paper in March 2020, stating the means by which a central bank digital currency could help meet the objectives in this digital age. As a matter of law, a UK court recognized cryptocurrencies as assets in a property ownership dispute in December 2019.

7)    In March 2020, the U.S Democratic Party published a draft stimulus bill, which included a provision for digital dollars as a means to make payments to businesses and individuals hit in this pandemic. The call to create a digital dollar has grown ever since Jerome Powell, the chairman of the Federal Reserve, said he’s looking into the possibilities of a CBDC.

8)   Among other banking entities, the International Monetary Fund (IMF) has long been promoting the CBDC and believes cryptocurrencies can reduce the reliance on government-issued money. The former managing director of the IMF, Christine Lagarde has urged central banks in November 2018 to consider creating their own digital currency, which could satisfy public policy goals, including but not limited to, security and/or consumer protection, financial inclusion, and privacy in payments.

Until the end of 2016, cryptocurrencies were relatively unknown. However, rapid developments is evidence of a brand new industry being built in real time. The ramifications of this were theorized as early as 2018, when Bank of America voiced concerns about the threat that blockchain posed to centralized banking. While many can argue that crypto hasn’t proved itself, the growth of the cryptocurrency and blockchain space in 2020 is proof that decentralisation is likely here to stay.

The age of self-custody is in fact already here, and consumer banking habits are continuing to change. People can self-custody their own digital cash in a way that that was never possible.  This is not only leading to new business models for DEFI and peer-to-peer lending, but is also giving customers more control over their own decisions.  This eliminates the need for people to be stuck between either banks or money handlers like Western Union.

Customers now have the ability and desire to engage in mobile banking built on 21st century technology – not tech built in the 1970’s.  They demand instant gratification and convenience in their transactions, all of which can be solved with blockchain.

There’s reason to believe that financial institutions including banks may soon provide financial vehicles for investors to buy and trade digital assets. It’s difficult to predict the exact future of digital currencies in the coming years, but let’s keep our faith in what Bill Gates said decades ago:

“Banking is essential, banks are not.” 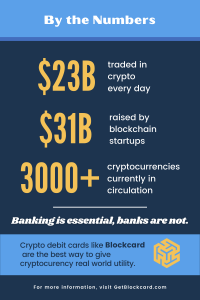 Crypto debit cards like Block car are the best way to give cryptocurency real world utility. You can register for a Blockcard today!